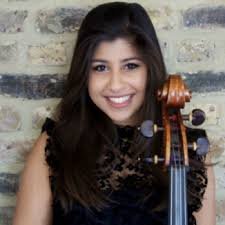 Meera Priyanka Raja studied at the Royal College of Music with Professor Alexander Chaushian. She was supported by the Musicians’ Company Lambert Mentorship Scholarship and was a Help Musicians UK Postgraduate Award Holder.

As an experienced chamber musician, Meera regularly performs with her piano trio. They have performed at venues across London and Europe and reached the semi-finals of the Royal Overseas League Chamber Music Competition. They were invited to hold a residency at 'Music at Brel', Roquecor. She has performed in festivals including the British Isles Music Festival, Sacconi Chamber Music Festival, Buckingham Palace Coronation Festival and Cello Akadamie Rutesheim in the class of Jens Peter Maintz.

As an orchestral player, Meera has led various projects at the RCM and was selected to perform in a 'United Europe' tour with concerts in Berlin and Rotterdam as well as joining the Symphony Orchestra of India for concerts in Mumbai and their UK tour. She is a member of Chineke! Orchestra - Europe’s first majority-Black, Asian and ethnically diverse orchestra.

Meera played in the award-winning West End Musical ‘Bend it like Beckham’ and New Musical, ‘Beyond the Fence.’ She subsequently performed as a solo cellist in a touring theatre production of E.M. Forster’s novel ‘A Passage to India.’ Meera has performed live on BBC radio3’s ‘In Tune’ programme with composer and tabla player Kuljit Bhamra MBE and has performed solo in venues across the UK and Europe. Her interest in Indian Classical Music has led her to play on the newly released album, ‘Essence of Raga Tala.’

Meera has a passion for teaching and outreach work. As well as teaching privately, she was most recently a Cello Mentor for the Sparks programme at RCMJD. As part of being a Yeomen Young Artist with the Musicians' Company, Meera is involved in conducting assemblies in schools to introduce the cello and classical music. She strongly believes that every child is deserving of a musical education.